One factor in determining the quantity of snow guards necessary to hold snow on a roof is the pitch, or steepness of the roof.  It is generally understood that snow doesn’t tend to avalanche on mountainsides on slopes less than 22 degrees.  Between 22 degrees and 30 degrees snow can avalanche but it is not considered probable.  Mountain slopes in excess of 30 degrees are considered somewhat likely to avalanche.  Slopes in excess of 45 degrees are prone to avalanche. 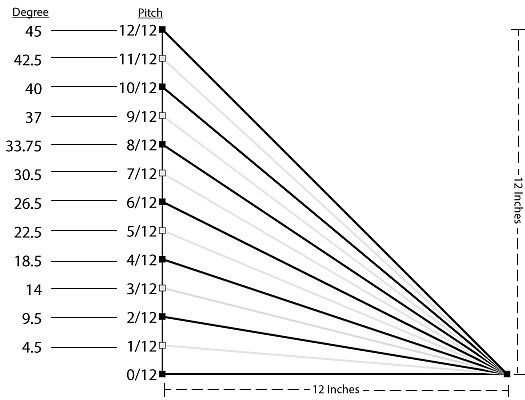 What that means in roofing lingo:

On roofing products with a higher coefficient of friction like asphalt shingles, wood shakes, and rougher tiles, snow should behave much like mountainsides.  Therefore, except in very high snow load areas, snow guards aren’t usually necessary to stabilize snow on roof slopes less than 30 degrees (7/12) and are usually not necessary at all on roof slopes less than 22 degrees (5/12).  Snow guards should be considered on slopes in excess of 30 degrees (7/12) in moderate to high snow load areas.  On roof slopes approaching 45 degrees (12/12) snow is very likely to slide and snow guards should be considered in areas where it is necessary to control snow slides.  On steeper roofs, snow fences instead of snow guards, or a combination of both, may be necessary to achieve the snow retention desired.

The physics of mountainside avalanches are not directly applicable to roofs with a lower coefficient of friction like synthetic slate and shake, metal, natural slate and single ply low slope materials like PVC, TPO and EPDM membranes.  On these roofs, snow can slide at pitches of less than 1/12. For these roof types, snow guards must be considered on all slopes that shed snow onto walkways, driveways or decks.   On higher pitch roofs of these materials, snow guards may need to be applied in a layout that covers the entire roof area to stabilize the snow pack.  (The layout will have a higher density of snow guards at the bottom of the roof area and a lower density of snow guards at the top of the roof area).

How we apply that to your specific situation:

At Rocky Mountain Snow Guards, we understand snow dynamics and snow guard theory.  Our state-of-the-art snow guard calculator determines the quantity of snow guards per square based on many job-site factors.  Snow load, roof type, exposure to wind and sun, the type of building, relative roof insulation and pitch are all considered.  Once the quantity of snow guards per roofing square is determined, we take that information and develop a job-specific layout.